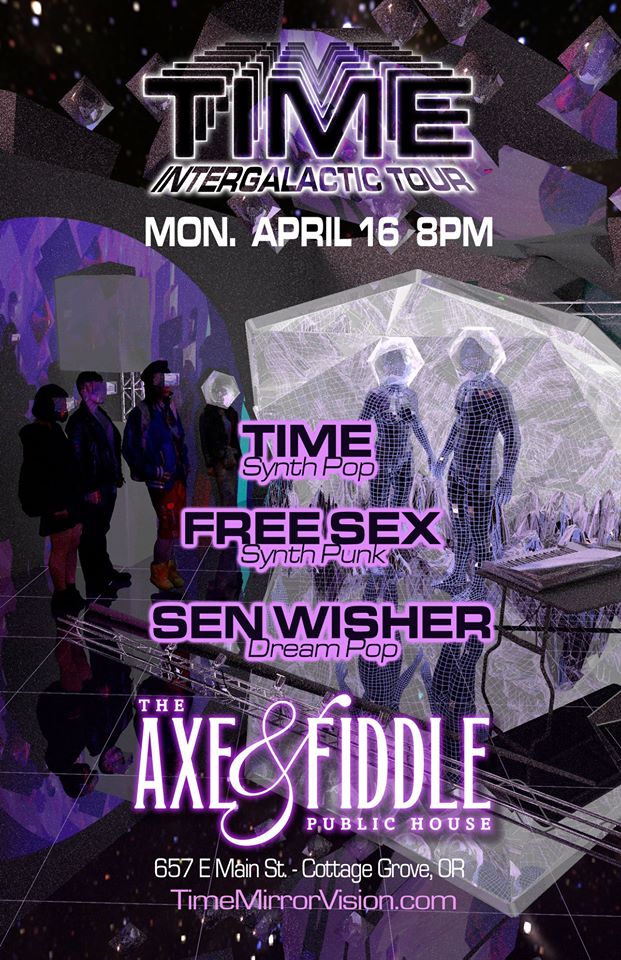 TIME, Free Sex and Sen Wisher at Axe and Fiddle

Michael and Madhava Collins were driving through Houston on Thursday, March 15 with spotty internet service and a schedule. They were on their way to Cottage Grove for a stop on their 40-date tour that will span several states and last more than two months.

But Houston is nearly a country away from where they started.

“I had been doing this underground music thing for about 14 years,” Michael said. “I played solo, I played with a band and you know, I met Madhava in Boston.”

He had been living in Brooklyn at the time but had traveled to Massachusetts for a show. It would become the launching pad for TIME, an experimental synth-pop duo now based in Florida.

“It took awhile but we realized we have really good musical chemistry together,” Michael said.

The two play together now but their partnership started as a unique collaboration. Madhava, who had never composed music, says she began to hear melodies, sing them into her phone and then bring them to Michael.

“We would flesh them out,” he said. “That was about two years ago and since then we’ve been on four tours. We go out for two or three months at a time.”

They take inspiration from medieval poets, hymns and prayers as well as the more specific influence of Italian disco and German tunes from 1983.

It will be the duo’s first time in Cottage Grove but they say Oregon is on their list of favorite places since touring in Eugene in 2016.

“We love Oregon,” Madhava said. “It’s beautiful, it’s like the polar opposite side of the country from Florida but I was struck because there’s green landscape. It reminds me of Florida, of home.”

TIME will be performing at the Axe and Fiddle on April 16 at 6 p.m.