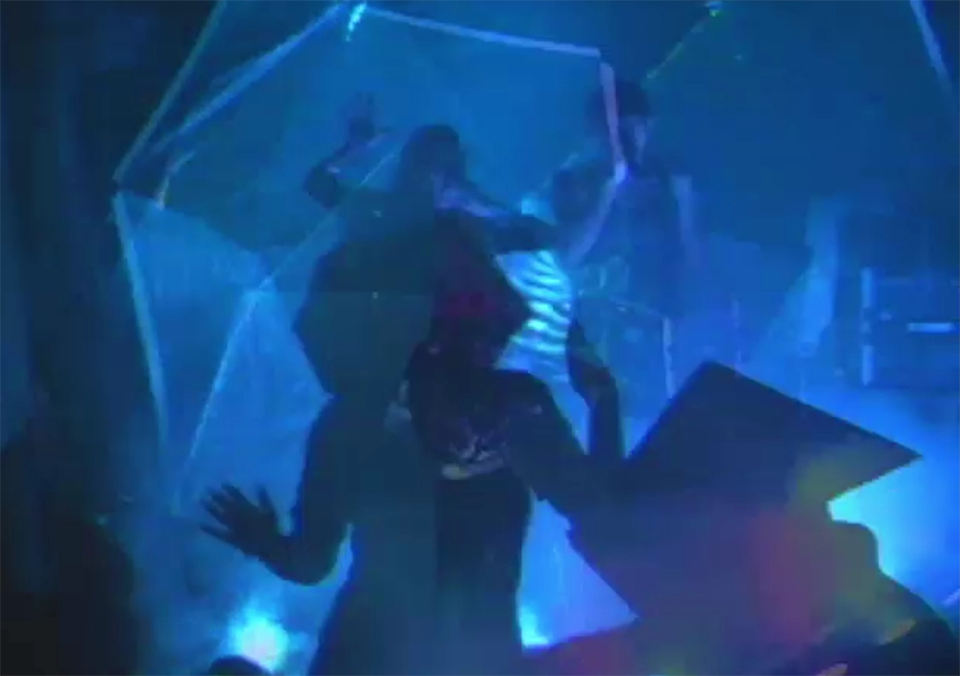 TIME from Gainesville, Florida, is currently on tour bringing its otherworldly synthesizer-based compositions to many corners of America. Its 2016 self-titled album is reminiscent of Alice Coltrane’s devotional albums and Peaking Lights. It has the saturated tones and atmospheres that have made so many analog synth projects of recent years tap into a sense of nostalgia for a time when, as Americans, we had the time and leisure to let our minds explore inner space or find solace in letting the imagination exercise its capacities in creative activity we often feel pressured to set aside in favor of non-meaningful work to merely survive. TIME’s music reminds us, if perhaps indirectly, that we must consider what we would want to do with our lives if we weren’t yokes to the machinery of late capitalism. Maybe it’s that the music has some roots in South Asian spiritual practices as hinted at below. Think something like Dead Can Dance, Sky Cries Mary and Tangerine Dream and you have something of the vibe.

The live shows will include a sense of theater beyond the rich atmospheres and emotional catharsis of the music so don’t miss out if you get the opportunity to witness TIME for yourself. We caught up with TIME during their transit through the southwest via email and learned a bit about their foundation, their connection to the DIY music world and what exactly is Mirror Vision, the art project that lent its name to the band’s tour in early 2017.

Queen City: Where did you grow up? What kind of music did you have access to when you were younger?

Madhava Collins: I grew up in the Canary Islands and South Wales. I would say that when I moved to the US 12 years ago my musical library broadened and became more sophisticated. I grew up on a lot of timeless classics. My mom would play old soul and Motown records as well as Michael Jackson, Tina Turner, Whitney Houston, Donna Summer [and such] then there’s the whole Spanish and Spanish speaking South American music: Salsa, merengue. Growing up Catholic, there would be several festivals of the saints in our town and the whole village would come out and celebrate and there would be live music all night long. And of course, also, disco!

Michael Collins: I grew up in Gainesville, discovered punk rock through a Minor Threat mixtape my brother made me and stumbled upon the tail end of the golden era of the Gainesville punk scene in the late nineties. Seriously formative in my understanding of DIY culture and the community necessary to support it.

Had either of you played in bands prior to TIME? What kind of music? What made you want to do something different?

Madhava: I’ve been fascinated with playing music since I was a child. One of the best things they taught me at school was how to sight read music. During my college years in Salem, MA I played blues harmonica and later chromatic harmonica in jazz band. I was in one of my music teacher’s bands for a little while. Then I dropped everything and became obsessed with devotional music from India. I started playing harmonium and an Indian drum called mrdanga. Up until 2 years ago I would play other people’s music and never felt inspired to write lyrics or compose songs. Then, while driving one day, I started hearing in my head a random arrangement of a traditional vaisnava song from my spiritual practice that is a prayer of protection to the lion incarnation of Vishnu. I began recording melodies, lines and drum beats on my phone recorder with my voice while stopped in traffic and it later became “Nrsimha Pranam,” which is on our album. That moment was like a flood door opening and since then I have probably recorded around 30 songs in the same way, two of them which will be in an upcoming album we are planning for 2018.

Michael: I had a high school band called Dasi which then became Prince Rama of Ayodhya and eventually just Prince Rama. We released about five albums together and toured almost constantly. It started as a “psych-folk” project and shifted towards tribal/noise/synthpop as our tastes evolved. Working with them was truly amazing but in many ways I had to set off on my own to discover my own voice.

What inspired the formation of TIME?

Madhava: Michael and I had been dating for a year or so when I started composing and he set me up with some software so I could begin laying everything down. He was super impressed . I think he was surprised too because I don’t think he knew I had that in me, and neither did I to be honest. That’s when we formed the band.

Michael: I had been performing solo for a few years under my own name, put that on the back burner to perform traditional kirtan on the streets of New York with a bunch of Hare Krishnas and then Madhava came along with an amazing collection of songs that inspired me to dust off the old synthesizers and get back in the game.

How did you get started playing live in Gainesville with the kind of music you make?

Madhava: Our first show was at a bike collective in Gainesville and we played with Ghost Fields. One of the audience members was pretty much the go to booker for DIY, experimental, awesome music in Gainesville. He brings amazing people here like Boy Harsher and Curse. Some known and many unknown but incredible people. He started booking us for his shows and gave us a good start.

Were you aware that there were other bands making new, all synth/electronic music that wasn’t part of the whole dance music world (EDM and such)? Were there other bands in Gainesville or nearby making the kind of music you wanted to before you started TIME?

Michael: Contemporary EDM I’ve avoided like the plague. My exposure to electronic music was initially through electroacoustic composers creating insane tape and synth based compositions under the auspices of forward thinking institutions (Pierre Schaeffer, Steve Reich, Terry Riley) and also the world of noise and harsh electronics that was so prevalent in the mid to late 2000’s (Teeth Mountain, Sewn Leather, DJ Dog Dick, etc.).  I eventually discovered Bobby Orlando and Italo disco and my life was never the same.

When did you become aware of like-minded artists around the country? Particularly in the DIY music world. Though I suppose Michael’s experience with Gainesville punk and Prince Rama didn’t hurt.

Madhava: This is our 3rd DIY tour and actually it was just a year ago that we set out on our first tour, which was 3 months long and took us pretty much everywhere, including Canada. There were only a handful of U.S. states where we didn’t have shows. Back then I was more naive about DIY touring. When I met Michael he had mentioned that he was going on tour for a few weeks with a friend and I pictured them in a huge tour bus with a crew. I had no idea DIY touring was a thing, but now I handle pretty much all the booking and get excited when I discover new amazing artists and folks from cool local scenes.

Michael: As a punk rock youth I was involved in Gainesville DIY spots and saw so many amazing bands pass through, it was only natural that I eventually sought to do the same.

Your self-titled, 2016 album reminds me tiny bits of Alice Coltrane circa Turiya Sings, early Dead Can Dance but with synths rather than guitar and analog synth science fiction soundtracks if the 80s. What inspired the combination of sounds and ideas for that album?

Madhava: That same summer I started composing I was working as a yoga teacher at summer camp and I asked Michael for some good relaxation music for my classes. Not only did I get that from him, but also amazing synth music: John Maus, Martin Dupont, Emeralds, Zeno and Oaklander and Inner City just to name a few. I got super into it!
Michael: John Maus, Popol Vuh, Bobby O, Robbie Basho—artists seeking transcendence through the medium of sound.

Your current tour is the Infinity Tour. What is this Mirror Vision thing that gave name to your tour earlier this year?

Madhava: That’s our collaboration with our friend and Florida artist Jay Rosen. Michael and I were living at a show space where Jay had his exhibit last year and we were so impressed. It was the most incredible thing in the whole show. Everyone flocked to try on his head pieces. When you wear them it totally transforms your reality. You can see out, depending on the light, but you also see multiple reflections of yourself inside from different angles and sometimes you can even see behind you. It’s like being a kaleidoscope.

One day Michael asked Jay if we could tour with the pieces, so we took them on the road for our Mirror Vision Tour earlier this year. When we got back from tour we said “Now we want a whole stage!” And he built it in less than 3 months. My personal connection with Mirror Vision is that it serves as a visual representation of an important concept explained in the Bhagavatam, one of the main texts of our spiritual practice, that this material plane is a distorted reflection of the spiritual plane.

There seems to be a real moment right now, or has been going on for a few years, where synthesizer music, darkwave/industrial and post-punk music is enjoying a real renaissance and this time more interconnected than before. Do you feel this is the case? If so, how has this benefited you? Are there other bands you’d recommend to anyone out of all that and why?

Madhava: It’s hard for me to say whether synthesizer, darkwave/industrial and post-punk music are at a renaissance right now because it’s music that I am super into and I feel like we attract or surround ourselves with people on the same wavelength. I have talked to folk who have no clue about this music at all, and I doubt they would say it’s currently prolific. One of my old pals from college, upon hearing our album, said “What is this? I’ve never heard anything like it! I can’t make sense of it!” Mind you, this is a person who plays bagpipes and is into contra dancing or something like that. At the top of my list of current artists right now is Drab Majesty. Not only is their music incredible in and of itself, but they have an interesting aesthetic and performative vibe which is a direction that we are also exploring.